LILIN day/night 4K Ultra HD (UHD) Auto Focus IP camera with a weather-proof sleek enclosure and 35-meter IR illuminator enhances High Definition (HD) images by providing 4 times HD pictures with beautifully natural detail and astonishing saturated colors.Built-in with Auto Focus feature to automatically focus the camera from a distant location, which eases the process on installation and helps you effectively position the camera at the right focus angle in a matter of seconds. The full featured 4K UHD Auto Focus IP camera produces a powerful output housed in a discreet form factor, which is perfect for themed and architectural environments. 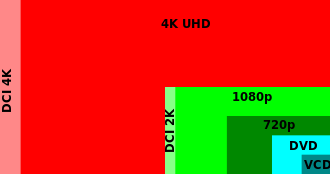 Also called 4K, refers to a display device or content having horizontal resolution on the order of 4,000 pixels. Several 4K resolutions exist in the fields of digital television and digital cinematography. In the movie projection industry, Digital Cinema Initiatives (DCI) is the dominant 4K standard. In television and consumer media, 4K UHD or UHD-1 is the dominant 4K standard. By 2015, 4K television market share had increased greatly as prices fell dramatically during 2014 and 2015. By 2025, more than half of US households are anticipated to have a 4K-capable TV (2160p), much faster than the adoption curve of FullHD (1080p).

4K resolution refers to a horizontal resolution on the order of 4,000 pixels. The use of width to characterize the overall resolution marks a switch from the previous generation, standard high definition television, which categorized media according to the vertical dimension instead, such as 720p or 1080p. Under the previous convention, 4K UHD would be equivalent to 2160p.

Many manufacturers may advertise their products as UHD 4K, or simply 4K, when the term 4K is traditionally reserved for the cinematic, DCI resolution. This often causes great confusion among consumers.

YouTube and the television industry have adopted UHD-1 as its 4K standard and UHD-2 for NHK/BBC R&D's 7680x4320 pixels UHDTV 2 with their basic parameter set is defined by the ITU BT.2020 standard. As of 2014, 4K content from major broadcasters remains limited. On April 11, 2013, Bulb TV created by Canadian serial entrepreneurEvan Kosiner became the first broadcaster to provide a 4K linear channel and VOD content to cable and satellite companies in North America. The channel is licensed by the Canadian Radio-Television and Telecommunications Commission to provide educational content. However, 4K content is becoming more widely available online including on YouTube, Netflix and Amazon.  By 2013, some UHDTV models were available to general consumers in the range of US$600. As of 2015, prices on smaller computer and television panels had dropped below US$400.